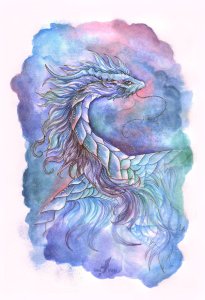 This book is dedicated to my mother, Margaret Mary Teresa Kroeger.  She was a constant source of inspiration to me and had a wonderful way of turning lemons into lemonade.

Years back, when her granddaughter was just a little girl, Mom would write one or two paragraph stories about some dragons as a way to teach her granddaughter the importance of family and to find a common ground for the two of them.  Those stories are long gone, but I remember her plans and her joy in writing those stories.

I remember that and so, remembering her beautiful spirit, her tenacity, her determination, I dedicate this book to the memory of the most wonderful, dynamic woman I have ever had the privilege of knowing, my mother.

Before the beginning, there was nothing, only an all-powerful being that has had many names.  When time finally began, He was known as the great “I AM”.  God in heaven created beings that would sing His praises and carry out His will.  He had much planned and these powerful beings were but the first step.  He gave each of them a great gift, a free will.  The angels were free to choose to obey their Creator or not.  This is what happened.

God took joy in creating each angel and endowed each with powers and beauty as gave Him pleasure.  As he created one, it was more beautiful than any of the others.  As God looked at the great beauty of this angel, He said he would be an Angel of Light.

So it was and for eons, Lucifer was God’s first assistant.  He enjoyed privileges none of the others received and was, by far, the most beautiful angel in heaven.  His position, privileges, and appearance led to pride.  He began to believe he was better than the other angels and made sure they knew it.  He developed a group who agreed with his ideas and they would spend their time teasing and bullying the other heavenlies.  As time went on, he began believe that he would be a better, stronger leader than Yahweh and plan a coup d’état.

The day of the great battle came and the battle was great but short.  A full third of the angels in heaven had allied themselves with Lucifer.

How you have fallen from heaven,
morning star, son of the dawn!
You have been cast down to the earth,
you who once laid low the nations!
13 You said in your heart,
“I will ascend to the heavens;
I will raise my throne
above the stars of God;
I will sit enthroned on the mount of assembly,
on the utmost heights of Mount Zaphon.[b]
14 I will ascend above the tops of the clouds;
I will make myself like the Most High.”
15 But you are brought down to the realm of the dead,
to the depths of the pit.

Lucifer sought glory for himself and in his sin lost his place of honor in heaven.  He and his followers had chosen not to follow the Lord God, but to follow their own desires.  This gave birth to the evil in this world.  It was present long before God decided to create earth and its inhabitants.

When Lucifer rebelled against Yahweh, each angel was given a choice to go with Lucifer or give up their free will and remain in heaven.  A third of the angels would not turn their free will over to God and exited heaven with the Angel of Light.

To this day, Satan works to win souls to him through lies and deceit.  He enjoys hurting you, making promises that he has no intentions of keeping or leading you into a dead end trouble, addiction, slavery, anything to hurt you or keep you from Jesus.  His minions whisper in our ears suggestions meant to cause us to sin and disappear from God’s labyrinth.  We must be careful, hide God in our hearts to be able to resist Satan.  When God created earth and the Garden of Eden.  Satan snuck into Eden, possessed one of its creatures and convinced Eve to eat from the tree of life.  The only commandment God had given was not to eat from the Tree of the Knowledge of Good and Evil.  Satan’s promise was that if they ate of the tree they would have the same knowledge that God had.  Once they ate, they realized the deception, but it was too late.  They became aware they were naked and in shame, ran to fashion something to hide that nakedness.  Shortly after, Jesus came to walk with them.  They did not meet Him and He sought them out.

Did you know He will seek you out if you will confess your sins with sincerity and call on Him to enter your heart He will move in!   He will work on you to bring you into His total saving grace.  Once you are His, you can never be taken from Him.

Satan, Lucifer, is the Prince of Lies and he lies very convincingly.   He will convince you that Jesus never wants you to talk or pray to Him again.     Satan will try to tell you that you have to get yourself squared away first, or that you need to fix your life, or any number of things that will be impossible to accomplish to meet what you have been told are his demands.  Please don’t believe these lies.  They are one of the methods he uses to keep you in bondage to sin; to keep you away from the saving grace and joy of salvation through Christ Jesus.     Satan will say anything to keep you apart from God.  Be careful, he will whisper lies to you, keep you away from your true joy and happiness.  His joy is your misery.  Always remember His love for you.  Remember:  For He so loved the world that this gave his only son so that none may perish.  Remember that.  He loves you right now, just the way you are.

Now let’s go back to the story.  As you read, think of Lucifer’s intense hatred,