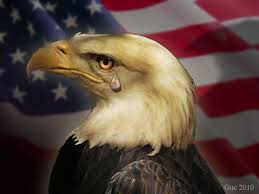 She was desperate, out of breath, confused.  Another round of fire just barely missed her as she banked hard to the right.  For years, hundreds of years she had enjoyed a good relationship, now, in the same words they used to say to welcome her, they cursed her and tried to eradicate her.  Her heart broke; shattered into a million tiny pieces.  She would forgive them if only she knew what was wrong.

Finally, she spied a tall tree that provided some cover.  She needed time to rest, to plan.  She dive bombed the tree and scattered all the birds that had been sitting contentedly in it.  She then flew with them for short ways hoping it would draw the people off.  She was winded and had to rest.

After she landed and got some of her strength back, she began to inspect her perch. .  Fluttering in the breeze on a flagpole next to her perch was a flag.

Eagle straightened up trying to look her best.  Not many of her kind had been lucky enough to meet a flag.  This meeting was, indeed, a great honor.  “I am  ‘Sorrow;’ “   she responded.

“Interesting name, but fitting given the circumstances,” replied Glory.

“Can you tell me what is going on with the people?” Sorrow inquired.  “I have always had such a good relationship now I must hide.”

“You are wise to stay out of sight.  There is a movement among the people.  The leaders of it include the President himself, and then others who have names people like to follow, like Clinton, Reed, Roberts, just to name a few.”

“I was warned about Reed and Roberts but the others, I thought they had sworn an oath to protect and stand my what we represent.  I simply do not understand…”

Glory and Sorrow stopped their conversation as cries came from below.  Sorrow spied the goings on first and began to hiss and scream in anger and fury.  “Sorrow, what is it you see?”  Glory asked.

“They have another of your kind, your sister.  A man is stomping her, trying to grind her into the road.  Another, oh no, I, I cannot watch!  Another has lit it ablaze!  I must go! I must try to help her! ”

“Wait, Sorrow, do not go.  That is my sister, ‘Stars and Stripes.’  If you go down you will only be hurt or killed yourself.  As much as my heart breaks…”

Screams from Stars and Stripes rose in bone-chilling horror and Glory could not continue.  Finally, the screams died out as Glory’s sister was no more.

Glory did not flutter in the wind; she hung like a tired dishrag.  She grieved for her sister and for the country both of them represented.

“Glory, I am so sorry you have lost a sister; I wish I could have saved her.” Sorrow whispered softly as a tear fell from her eye.  “How did things come to this?  I do not understand.”

Flag was quiet a moment and then began:  “Years back, the people signed a document that started:

‘We the people of the United States, in order to form a more perfect union, establish justice, insure domestic tranquility, provide for the common defense, promote the general welfare, and secure the blessings of liberty to ourselves and our posterity, do ordain and establish this Constitution for the United States of America.’

They had just come through a terrible war for independence and were trying to set up their government.  The creation of a republican democracy was a unique experiment, and the civilized world was waiting, watching for this fledgling government to fail.

She almost fell in the mid-eighteen hundreds when the war called ‘civil’ began.  Father fought son, brother against brother.  Again, it almost destroyed the country, but the people reunited and she regained her strength.   But hatreds and rivalries went on and hated groups and supremacist groups formed such as the KKK  and later on the Neo-Nazis.  They caused great sadness for those who were the object of their biases, but as a whole, the country moved forward.

Apologists for the minority groups, such as blacks, rose and at first, their cause was good and just.  Jim Crow laws and double standards were struck down; civil rights apologists became more interested in power, money, and fame.

The success of the country allowed the people to relax.  The state had taken over education, medicine for the least able, offered welfare for those who could not provide for themselves.  The people began to move away from a reliance on God or adherence to His laws and precepts.

Once they began to move away from God, their downward spiral began.  Oh to be sure, there were some shining moments and here and there were pockets of a revival of faith in God and patriotism; especially right after Pearl Harbor and then after the Twin Towers.   In spite of this, people were listening to those who said what they wanted to hear rather than what they needed to hear.

The success of the country allowed the people to relax.  The state had taken over education, medicine for the least able, offered welfare for those who could not provide for themselves.  The people began to move away from a reliance on God or adherence to His laws and precepts.

Groups claiming to do a public service did a huge business in abortions and selling baby body parts. Women,  pressured into accepting these lies were their rights, defended the barbaric practices.  Others wanted special rights depending on skin color, sexual orientation, or religious beliefs.  After a while, this country became almost the opposite of what it’s Declaration of Independence and Constitution described.  New reinterpretations of the Constitution,  were explained to the people by claims that these are “living documents” and as such can be altered with the times rendering them useless for guiding the country and the party in power got to set the rules rather than the Constitution and Bill of Rights.

Sorrow, the eagle, looked at “Glory” the flag, and there were tears in Sorrow’s eyes.

“Why do you cry?” asked Glory.  Things change, people change.

Glory was quiet for a moment and then said, “There was once a man named Khrushchev.  He was from Russia, then known as the USSR.  He was famous for banging his shoe on the table.  He said that the communists would conquer America from within.  I think his exact words were:

‘We will take America without firing a shot … we will bury you!

“We can’t expect the American people to jump from capitalism to communism, but we can assist their elected leaders in giving them small doses of Socialism until they awaken one day to find that they have communism.

“We do not have to invade the United States; we will destroy you from within.’”

Sorrow bowed her head in agreement, and that one tear turned into two and three and four.

“May what was the miracle of America rest in peace.  I must leave this place, Glory.  I fare you well.”

“Good luck, Sorrow, perhaps you will find a better place.” Glory responded wishing she too could leave this place of anger and hatred.